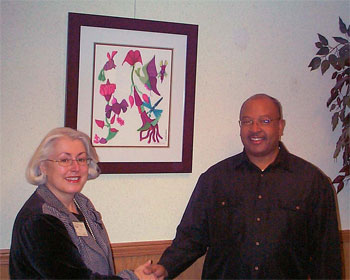 If you look closely – extremely closely – at some of the paintings hanging in the library, you’ll see something strange. Actually, it’s what you won’t see that’s unusual. There are no brushstrokes, because the artwork was created with magic markers. Twinsburg resident Michael Winston, who created the artwork, is one of just a very few artists in the United States to work entirely with marker.

To be fair, these aren’t the same markers most of us have lying around in our desk drawers at work. Winston uses a high-quality instrument that lays down the strong colors often found in his work.

“My floral works best utilize the spectrum of the medium I work in,” Winston said. “Because they have many true colors, when grouped in a bouquet, they invite your eyes to dance from color to color.”

Those colors have caught more than a few sets of eyes. Winston’s work has appeared at shows and galleries throughout Northeast Ohio, and was selected as the cover art for the program guides of the Beachwood Festival of Arts as well as the St. John’s Festival of Arts. His work has also appeared on the cover of Sunshine Artist Magazine, a national publication.  Winston’s works are on display at the library in the audiovisual and children’s areas in the library. The pieces in the audiovisual room were graciously donated in appreciation of the library’s early and ongoing support of the artist.

There are no upcoming events.